An area of focus within the realm of omnichannel has been extending our online experiences and platforms into the physical world. To merge Facebook, Amazon and Pinterest with the business of clicks and bricks it would take APIs, personal devices and cooperation with the gatekeepers of physical store retailers. It’s a worthy and lucrative goal as increasingly, physical stores with omnichannel at heart are gaining increased favor.

Last week in the retail world, Pinterest announced that they are unveiling “Buy” features after much anticipation.  It’s a logical next step for every person who has taken the time to curate a wishlist of clothing, home decor, recipes, and crafts to now be able to directly buy within the app.  Pinterest is allowing the decision time to be shortened and making mobile purchases easier than ever.

One way that pinners can bring their dream closets or homes to life is to add an item directly to their Amazon Wishlist.  Now, their Pinterest boards will be able to give them real prices, reviews, and recommendations.  A retailer, in this case, Amazon, will know the correct items to market to the ideal customer with purchase intent data (their Pinterest board).  Before, Pinterest users had a wealth of information on their likes and preferences at their fingertips with no intent being shown unless they clicked through.  Someone could pin an image of a lamp that they liked and the retailer would never know that they had an interested shopper. Now there will be a connection of intent to marketers.  All of this helps to further power the analytics and ability of e-commerce, but there is still a missing piece: the physical store experience.

E-commerce and M-commerce are becoming increasingly important in the retail world.  However, there is no ignoring the fact that 90% of purchases take place in store.  The majority of people would prefer to try on that sweater or sit on that couch before they could commit.  For clothing specifically, 2% say they only shop online and 32% say they would never.  While these are the two extremes, it is clear that online shopping does not account for the majority of sales.   While it’s great to see new ideas coming to the table in e-commerce, we need a way to extend that Pinterest board into a store and make the journey continuous

This is not a completely new idea. A few years ago, Nordstrom dabbled in incorporating Pinterest into their physical stores in a rudimentary way.  They placed icons next to featured items and would show what was most popular on Pinterest in analog fashion. This was simply a glorified way to show that their items were featured on Pinterest with no clear benefit to the shoppers or way to convert sales. In this next phase, Nordstrom will be one of the first users of buy buttons on their social platforms.  With 42% of adult women on Pinterest, and 81% of Nordstrom’s sales occurring in store, we would love to see a combination of these two efforts. 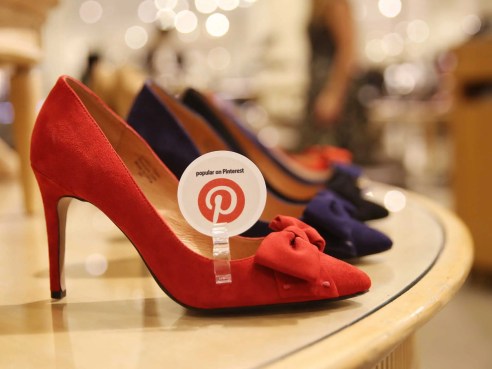 A shopper’s Pinterest feed can provide them with recommendations which could be used as they walk through the store.  If they were eyeing a blue dress from another store, Nordstrom could show a similar one.  If they like what they are shown, items that go with it and recommendations could emerge as the shopper requests them.  This could be done through a mobile app in which someone could login using their Pinterest account and have a unique and interactive shopping experience guiding them through the store. Staff across retailers could access a larger and singular source of continuously evolving preference and intent data. With all the focus on clienteling and CRM, a major downfall is still that the data resides in the walled garden of a single brand. Customers want their data to follow and have universal applicability across their journey. As Facebook became the nexus of social intent data, will there be a corollary platform that dominates retail intent? Many have tried, none have yet succeeded. A dominant factor to cracking the code will be integration of physical and digital retail intent.