Omnichannel challenge of the week: seeing opportunity in the Facebook phone It’s named Facebook “Home.” The first thing that came to mind was the classic line from E.T., “E.T. phone home.” Who would have thought he’d foresee the future from 1982 and even more startling that he’d pick the HTC over the iPhone! But in all seriousness, the Home phone from Facebook is anything other than extra-terrestrial – its available on Earth this week. And if you read the headlines, its like watching a tennis match of positive vs negative perception on this new “collection of apps” as described by Facebook. We won’t get into whether or not it was a good strategy to have built a phone versus a collection of apps. Nor will we hypothesize whether people need Facebook updated on their homescreen versus one click away in the Facebook app. There are plenty of pundits out there for that. Instead we’ll consider the omnichannel implication of what a Facebook phone can offer.

There are several aspects to omnichannel and Facebook Home: NFC, VOIP and app launching functionality. In other words, it expands Facebook’s data collection (and their ability to provide it to advertisers), allows free calls (with data tracking of who you’re contacting), and it gives new options to share this and other data by simply tapping (that’s what NFC allows). First, its an inexpensive device with an AT&T contract, approx $99.99. So that’s a plus for mass adoption by a younger demo. The VOIP capability via Facebook is a big disruptor to make free global calls and increasing the usage via data versus standard network phone service. Your regular text messaging will be configured as Facebook messages and the app launcher, done via Facebook, will know what apps you launch. So what does all this mean for an omnichannel retail experience?

It means that Facebook can know that I checked in at Best Buy on Facebook, launched the Amazon price checker app, then shared what I found as a post or text. Clearly the ability to know where I am and what I am doing outside of the world of Facebook via other apps is deep information. Although they’ve claimed that they won’t passively track your exact location via GPS, they will report the city, etc. If that were to change, then even if I didn’t check in, Facebook could still know where I was and use it to monetize location-based advertising. 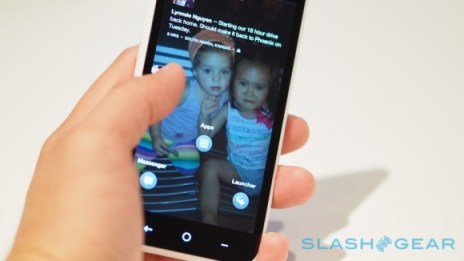 They could start passively tracking locaiton in the future by updating their policies. And if that does become the case, then in theory retailers could know which customers were frequenting competitors and launching price comparison apps in store. That is of course if Facebook would share that competitive information. And even in the that event, retailers still have to figure out what to do when they know there is someone showrooming in the store or if a loyal shopper of their competitor walks in the door. Creative customer experience and engagement in store will be king.

How can this data be acted on? Well that leads us to the discussion on Near Field Communication (NFC).

The notable and less discussed feature on the HTC Facebook Home phone is NFC. With NFC consumers can simply tap NFC tagged products to receive deals, reviews and

information. But this tapping mechanism also serves as a unique identifier that allows tapping to power personalization. Meaning that I tap an NFC tags in store and I have the ability to identify myself via the tap to the brand. NFC offers the ability to both send and receive information.So instead of passively receiving generic information, customers can receive custom content and offers in-store, just like they are now used to experiencing personalization online. With all this new data collection via Facebook and the ability for consumer to identify themselves via NFC by tapping surely that future potential of creative engagement in-store is fairly limitless. The key will be putting the customer in control of their own data to proactively offer it to the brands in-store instead of Facebook selling it and making billions of dollars. The Facebook Home phone with NFC leaves a lot of omnichannel potentail for innovation. We’re curious to see which brands start to take advantage of a younger generation with social forward NFC enabled smartphones.